"Heightened immunity and productivity from healthier cows means
lower vet bills and less stressful farming. But when it comes to dairy, this is just the tip of the Sea Minerals Iceberg"

“We put tape around some green stalks of field corn to identify them as having come from our experimental field. We mixed the experimental with control stalks and placed them in the feed lot for cattle and sheep. We watched as the animals munched away. It was immediately apparent which stalks they preferred, because after once sampling an experimental stalk, the animals would nuzzle and burrow in the pile to find another stalk, ignoring the control stalks until they had no other choice.” 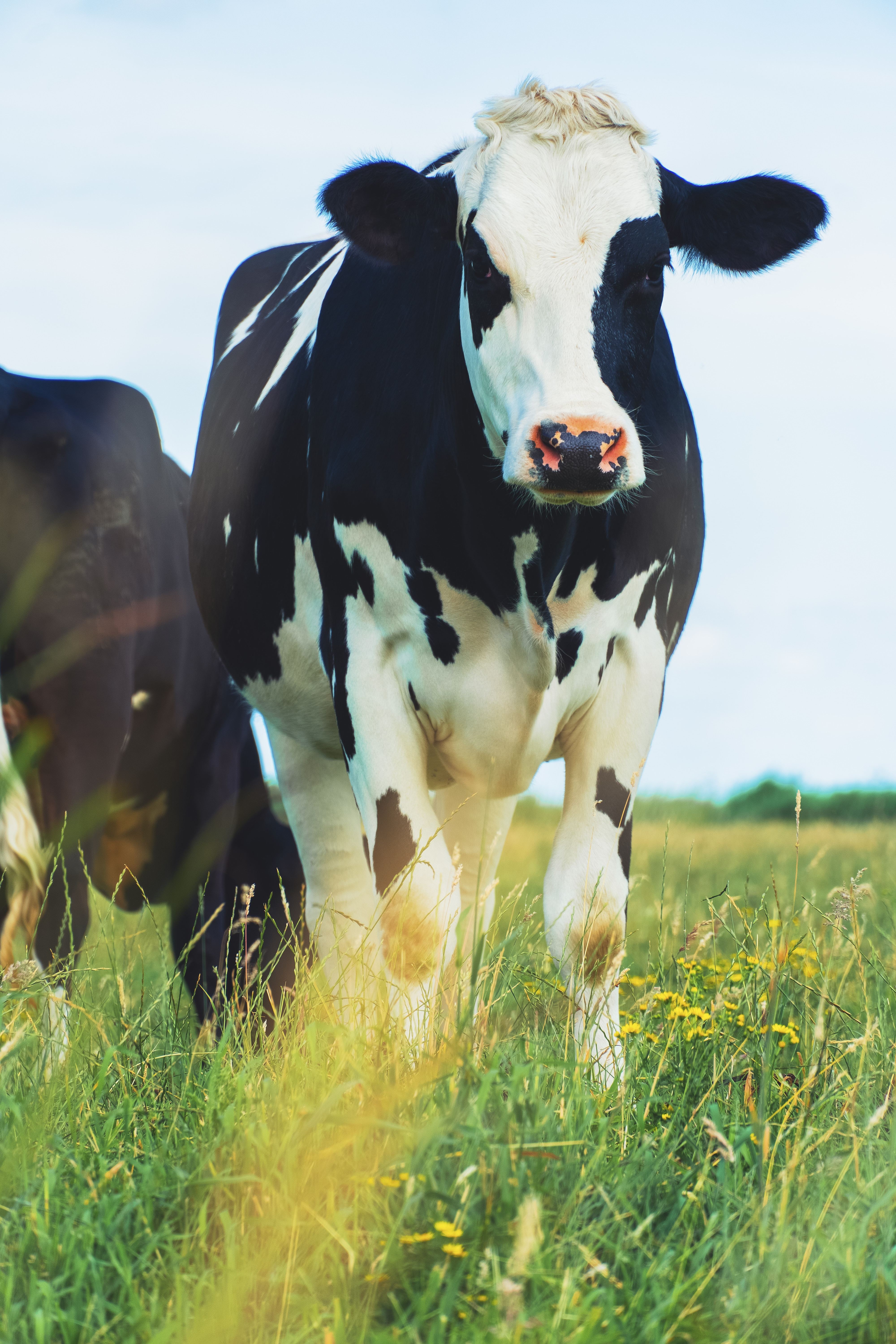 We have been offering SEA-90 to our dairy cows for three years. The cows’ coats are slick and beautiful, fly pressure has reduced, we do not have problems with mastitis, and the milk is delicious. We sell our raw milk locally, and my customers have told us that from the moment we began using SEA-90 they noticed an improvement in the taste and shelf life of our milk. 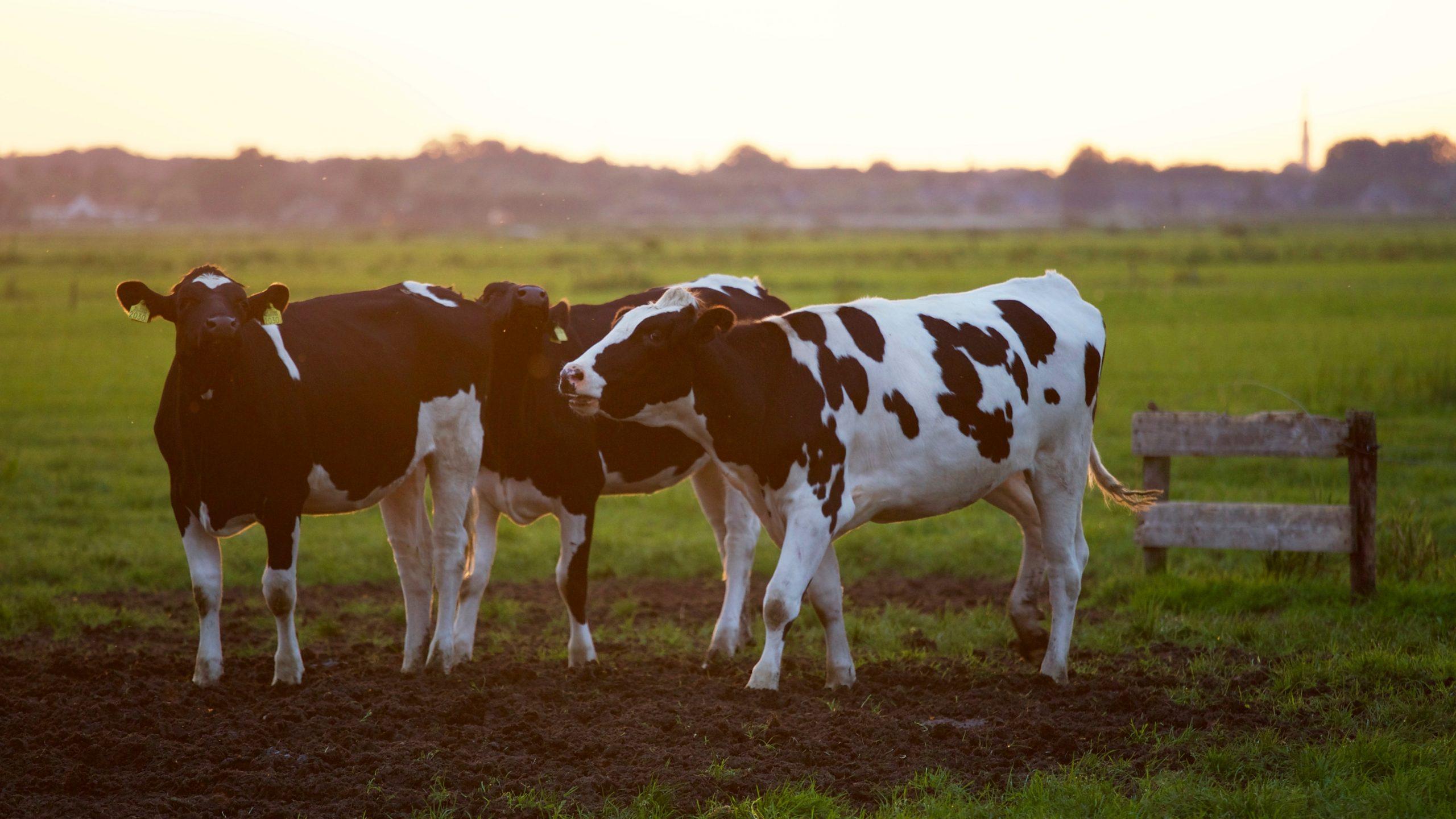 We began offering SEA-90 to our dairy herd as part of their free choice mineral program after hearing Robert Cain speak at the N. Michigan Small Farm Conference in 2006. Like most other dairy farmers, we had struggled for many years to find a mineral and fertility program that was approved for organic agriculture and would also help increase productivity and profits. SEA-90 does it all! Read the full story below in the CASE STUDY : RECORD PROFITS!

I sprayed 7kgs of SEA-90 per acre on alfalfa and harvested seven cuttings and experienced a protein increase of up to 25 percent. I also offer it to my dairy cows twice per day as a mineral, and they are healthier than I’ve ever seen them!”

I’ve been feeding my dairy cows SEA-90 for a little over 6 weeks and we’ve seen a 100,000 drop in somatic cell counts. We have no pink eye and we significantly reduced fly pressure in the barn. My son who is a fertility expert came by last week and told me he’d never seen cows in such a strong heat or as raw as mine. I am really impressed with SEA-90.

" Trace elements in the sea harbor the secret of healthy plant life, which in turn, contribute to the health of the animals who eat this plant life." Dr. Maynard Murray

Don Cordes of Cordesview Family Organic Dairy in Hillman, Michigan, began offering SEA-90 to their herd as part of their free choice mineral program after hearing Robert Cain speak at the N. Michigan Small Farm Conference in 2006. Like most other dairy farmers, Don had struggled for many years to find a mineral and fertility program that was approved for organic agriculture and would also help increase his productivity and profits.

In the past, Don utilized a mineral feeder box where he could introduce up to ten various mineral products allowing the cows to choose what they need on a daily basis. He stated that once he introduced SEA-90 into the feeder, the cows immediately showed significant interest. That was the first indication that SEA-90 contained something the cows desired that was not present in mineral products previously offered. Within six months he began to notice a decrease in somatic cell counts, fly pressure and hoof problems. After one year, Don realized a significant drop of over 100,000 in somatic cell count and he knew SEA-90 was impacting his herd and profits in a beneficial way. Since then his herd’s somatic cell count has stabilized and remains constant at 125,000. In addition, Robert instructed Don that he could choose to foliar feed and/or broadcast SEA90 to remineralize his pastures, grass and hay upon which his cows grazed.

Don initially ordered a full truckload of 20,000 kgs of SEA-90 and the following spring broadcast 100 kgs per acre on all his pastures. Robert explained that SEA-90 is offered as a mineral supplement to livestock because, in many cases, the pasture grass is extremely mineral deficient due to over-grazing and elemental imbalances. In Robert’s words, “SEA-90 is “water soluble mineral-rich rock dust and contains all the mineral salts and trace elements found in the earth’s core and the periodic table.”

During 2011, the Cordesview Dairy Farm marked their three year anniversary of the introduction of SEA-90 into their farm program. Don remarks that he has the best herd health he’s ever seen in his 60 years as a dairyman. The protein and sugars in Don’s forage and hay are now high enough to sustain his herd with no additional grain inputs, and his herd’s somatic cell counts have stabilized under 130,000. Milk protein and butterfat have increased from previous levels three and two percent respectively. In addition, milk solids have increased in the range of eight to 10 percent.

Organic Valley Coop established an acceptable LPC or lab pasteurized count test for shelf life. Milk should not test over 240. A monthly average below 76 generates a $ .40 premium per CWT, while a monthly average between 76-150 generates a $ .20 premium per CWT. Don Cordes’ milk consistently tests in the range of 10-60! Cordesview’s milk has also tested as preferred “A2”. Don commented that his cows have freshened better since he began broadcasting SEA-90 on his pastures and offering it as a mineral supplement. He was happy to say that his calf mortality rate dropped 75%. Since SEA-90 was introduced, Don’s raw milk customers claim that the milk produced by his cows tastes sweeter and is the highest quality in Michigan. However, the best part of this story is Cordesview Dairy is more profitable than ever before!

SeaAgri believes that the genetics of livestock can improve once SEA-90 is introduced into mineral and fertility farm programs. Herd health improves while new offspring offered a continuing diet containing 92 periodic table minerals and trace elements throughout their lives will be more disease and infection resistant and can grow more quickly to their full potential. After several years, new generations will be superior to their parents in many ways. In addition, SEA-90’s bounty of minerals and trace elements have the ability to remineralize deficient soils and increase the nutrient density of pastures and crops. SEA-90 has become a household word in many farming and gardening communities as proven by our growing customer base of over 3000 farmers and gardeners globally.

Being believers in Regenerative Agriculture soil, crop and livestock remineralization we expected good results, but were amazed with what we found. In the 2019 Pasture Research results below one number jumps off the page – 155% increase in Relative Feed Value! 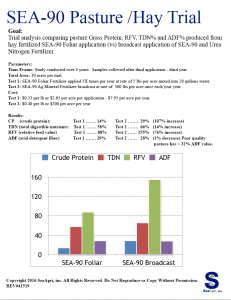 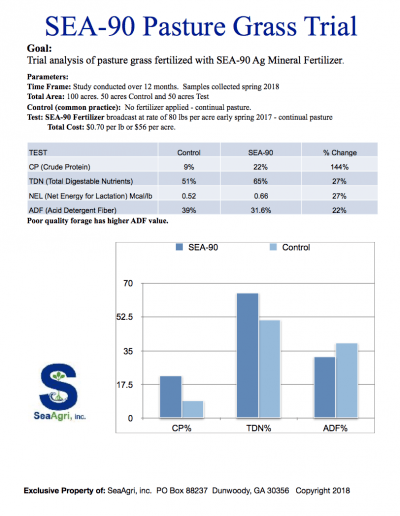 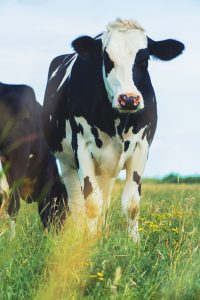 For livestock application we recommend using a combination of the following methods.

Choose the options that best suits you:

Choose this option if you are an agricultural product re-seller.

Choose this if you are an active farmer, gardener or plant grower..

Go to your Email Inbox

Go to your inbox of the email address you just used to sign up.

Find the email sent by us. It has the subject line Action Required

Click on the link inside the email to confirm your email address.

Sign Up to Get the latest Updates and Offers for Australian and New Zealand Producers:

Sign Up to Get the latest Updates and Special Offers for Australian and New Zealand resellers.

to Request a Quote For Large Scale Orders